10 years! Wow! A lot has happened…here are some highlights of the last 10 years–Some of the things listed below weren’t “achievements”, but highlights (like seeing Donny Osmond in concert):

Journalling on the scrapbook pages: 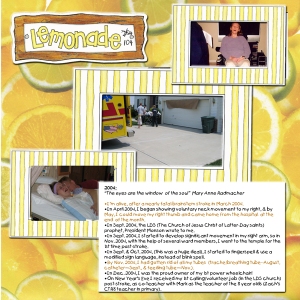 2004:
“The eyes are the window of the soul” Mary Anne Radmacher

• I’m alive, after a nearly fatal brainstem stroke in March 2004.
• In April 2004, I began showing voluntary neck movement to my right, & by May, I could move my right thumb and came home from the hospital at the end of the month.
• In Sept. 2004, the LDS (The Church of Jesus Christ of Latter-Day saints) prophet, President Monson wrote to me.
• In Sept. 2004, I started to develop significant movement in my right arm, so in Nov. 2004, with the help of several ward members, I went to the temple for the 1st time post-stroke.
• In Sept. & Oct. 2004, (this was a huge deal), I started to fingerspell & use a modified sign language, instead of blink spell.
• By Nov. 2004, I had gotten rid of all my tubes (trache/breathing tube–August, catheter—Sept., & feeding tube—Nov.).
• In Dec. 2004, I was the proud owner of my 1st power wheelchair!
• On New Year’s Eve I received my 1st calling/volunteer job (in the LDS church) post-stroke, as co-teacher with Mark as the teacher of the 8 year olds (Zach’s CTR8 teacher in primary).

2005:
“When life hands you lemons, always ask for sugar.” Anonymous

What are some of the most valuable lessons our parents have taught you?

I would have to say that one of the most valuable lessons I have learned growing up is to work hard and to never give up – try and try again. Or, as the little blue engine would say, “I think I can, I think I can, I think I can.” Even when the going gets tough, or when you are too shy to try one more time… you aren’t allowed to give up — things always seem to work out in the end if you have faith, say prayers, and believe in yourself. I learned this through tough experiences in my own life where mom and dad helped me to continue on, no matter how hard it seemed. I also learned it by watching them through their examples and their trials and happy times in life. There is nothing so strong of an influence to a child as a parent’s day to day actions. 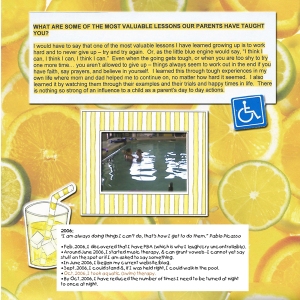 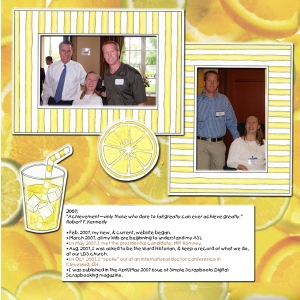 2007:
“Achievement—only those who dare to fail greatly can ever achieve greatly.” Robert F. Kennedy

• Feb. 2007, my new, & current, website began.
• March 2007, all my kids are beginning to understand my ASL
• In May 2007, I met the presidential candidate, Mitt Romney.
• Aug. 2007, I was asked to be the Ward Historian, & keep a record of what we do, at our LDS church.
• In Oct. 2007, I was a presenter at an international doctor conference in Cleveland, OH.
• I was published in the April/May 2007 issue of Simple Scrapbooks Digital Scrapbooking magazine. 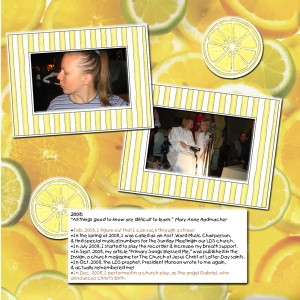 2008:
“All things good to know are difficult to learn.” Mary Anne Radmacher

• Feb. 2008, I figure out that I can suck through a straw!
• In the spring of 2008, I was called as an Asst. Ward Music Chairperson, & find special musical numbers for the Sunday Meetingin our LDS church.
• In July 2008, I started to play the recorder & increase my breath support.
• In Sept. 2008, my article “Primary Songs Blessed Me,” was published in the Ensign, a church magazine for The Church of Jesus Christ of Latter-Day saints.
• In Oct. 2008, the LDS prophet, President Monson wrote to me again, & actually remembered me!
• In Dec. 2008, I performed in a church play, as the angel Gabriel, who announces christ’s birth. 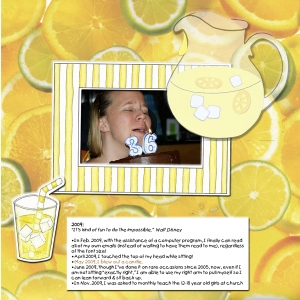 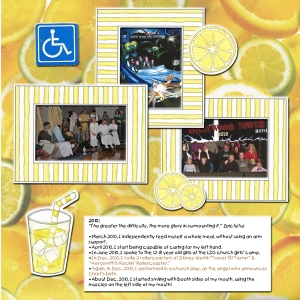 2010:
“The greater the difficulty, the more glory in surmounting it.” Epictetus 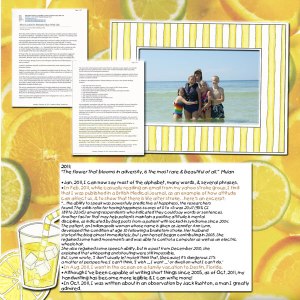 2011:
“The flower that blooms in adversity, is the most rare & beautiful of all.” Mulan

• Jan. 2011, I can now say most of the alphabet, many words, & several phrases.
• In Feb. 2011, while casually reading an email from my yahoo stroke group, I find that I was published in a British Medical Journal, as an example of how attitude can affect us, & to show that there is life after stroke…here’s an excerpt:
“…the ability to speak was powerfully predictive of happiness, the researchers found. The odds ratio for having happiness scores of 0 to +5 was 20.47 (95% CI 1.89 to 221.45) among respondents who indicated they could say words or sentences.
Another factor that may help patients maintain a positive attitude is mental discipline, as indicated by blog posts from a patient with locked-in syndrome since 2004.
The patient, an Indianapolis woman whose name is given as Jennifer Ann Lynn, developed the condition at age 30 following a brainstem stroke. Her husband started the blog almost immediately, but Lynn herself began contributing in 2005. She regained some hand movements and was able to control a computer as well as an electric wheelchair.
She also regained some speech ability, but in a post from December 2010, she explained that whispering and shouting were still impossible.
But, Lynn wrote, “I don’t usually let myself think that, [because] it’s dangerous. It’s a matter of perspective: I can’t think, ‘I wish …, I want …,’ or dwell on what I can’t do.”
• In Aug. 2011, I went in the ocean on a family vacation to Destin, Florida.
• Although I’ve been capable of writing short things since 2005, as of Oct. 2011, my handwriting has become more legible & I can write more!
• In Oct. 2011, I was written about in an observation by Jack Rushton, a man I greatly admired. 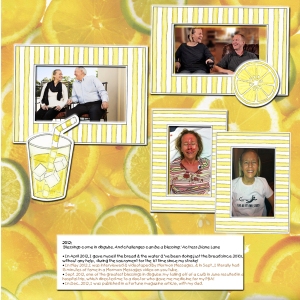 “Blessings come in disguise. And challenges can be a blessing.” Actress Diane Lane

• In April 2012, I gave myself the bread & the water (I’ve been doing just the bread since 2010), without any help, during the sacrament for the 1st time since my stroke!
• In May 2012, I was interviewed & videotaped by Mormon Messages, & in Sept., I literally had 15 minutes of fame in a Mormon Messages video on you-tube.
• Sept. 2012, one of the greatest blessings in disguise: my falling off of a curb in June resulted in a hospital trip, which directed me to a doctor who gave me medicine for my PBA!
• In Dec. 2012, I was published in a Fortune magazine article, with my dad. 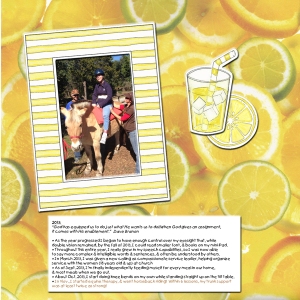 2013:
“God has equipped us to do just what He wants us to do?When God gives an assignment, it comes with His enablement.” Dave Branon

• As the year progressed I began to have enough control over my eyesight that, while double vision remained, by the fall of 2013, I could read smaller font, & books on my mini iPad.
• Throughout this entire year, I really grew in my speech capabilities, so I was now able to say more complex & intelligible words & sentences, & often be understood by others.
• In March 2013, I was given a new calling as compassionate service leader, helpingorganize service with the women (18 years old & up) at church
• As of Sept. 2013, I’m finally independently feeding myself for every meal in our home, & most meals when we go out.
• About Oct. 2013, I start doing knee bends on my own while standing straight up on the tilt table.
• In Nov., I started equine therapy, & went horseback riding! Within 6 lessons, my trunk support was at least twice as strong! 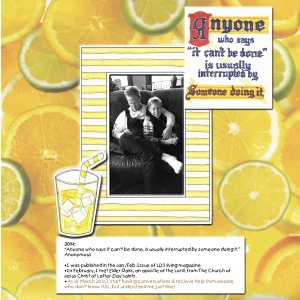 2014:
“Anyone who says it can’t be done, is usually interrupted by someone doing it.” Anonymous

• I was published in the Jan./Feb. Issue of LDS living magazine
• In February, I met Elder Oaks, an apostle of the Lord, from The Church of Jesus Christ of Latter-Day saints.
• As of March 2013, I start having conversations & recieve help from people who don’t know ASL, but understand me just fine

AN ARTICLE ABOUT ME IN BYU MAGAZINE

EARLY PHOTOS OF MY RECOVERY

ART FOR ALL: HELPING KIDS WITH LEARNING DISABILITIES GET INVOLVED